“Is this trying to be educational or condescending?” is what I kept asking myself during The Big Short. Because it’s got this weird (to borrow the term from A.V. Club) edu-tainment way of storytelling. Think heist-like comedy of going against “the man” mixed with docudrama exposing Wall Street for its shitty ways. I think that’s where a lot of my issues stem from with this movie. I can’t tell if it’s being informative or talking down to me.

Let’s back up for a minute. The Big Short started as a nonfiction book called The Big Short: Inside the Doomsday Machine. Released in 2010 by author Michael Lewis, it discusses the U.S. economic recession caused in large part by the 2008 housing and credit crisis through the stories of the people who saw it coming. It was adapted into a film by Brad Pitt’s production company, Plan B, much like Moneyball (written by the same author). 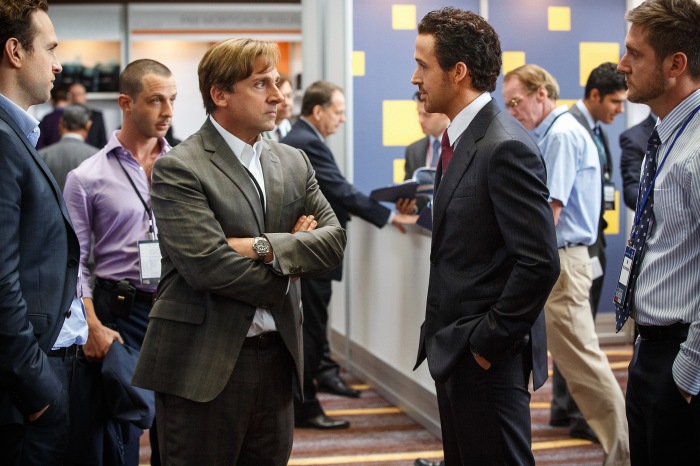 So there’s your background. Now, back to what I was saying earlier. The movie takes an unsexy topic and jazzes it up with fast-paced editing, occasional breaking of the fourth wall, funny-because-it’s-infuriating humor, and cutaways to celebrities explaining difficult concepts through simple metaphors. Seems like a fun movie, right? It’s definitely a lot more interesting than I thought it was going to be. And it follows the example set by Martin Scorsese’s The Wolf of Wall Street by cutting to the chase for people who might not be as knowledgeable when it comes to banking and economics.

It helps that the movie was written and directed by Adam McKay. You might not recognize the name, but you definitely know his work. Anchorman: The Legend of Ron Burgundy. Step Brothers. Talladega Nights: The Ballad of Ricky Bobby. McKay has proven that he’s good at parody (Think the CNN jab in Anchorman 2), so tapping him to make a film about the most embarrassing moment in U.S. economic history was smart. But there’s something about McKay’s direction and tone for this movie that throws me off, and it comes back to the edu-tainment.

The Big Short walks a thin line between education and condescension. For example, the cutaway with Anthony Bourdain talking about how restaurants use old fish in soups so they don’t lose money as a metaphor for CDOs (collateral debt obligations) makes sense. It took a complex concept and illustrated it with an easier example of business profits/losses. But Margot Robbie in a bubble bath talking market collapse? Purely for boobs.

“No, it’s for comedy!” Sure, whatever. But comedy, no matter how absurd, is intended to make a point. That gag had no other point than to say “We assume you’re bored, so here’s some eye candy.” And that’s really insulting for anyone going into The Big Short (an OSCAR-NOMINATED movie) knowing that it was about economics.

The Big Short: B-