Remember the Deadpool test footage that got “leaked” in 2014? If you enjoyed that, you will enjoy Deadpool. Hell, the opening sequence from this movie (which follows the tongue-in-cheek opening credits that list “A Hot Chick,” “A British Villain,” “A CGI Character,” and “A Gratuitous Cameo” as roles) is almost frame for frame that footage.

Like its R-rated superhero predecessors (Watchmen, Kick-Ass, Blade), Deadpool is a HARD rated R. And when I say hard, I mean it’s cartoonishly violent (in the watch-a-dude-get-oblierated-on-a-road-sign way), and it has sex scenes and swearing that would make a sailor blush. Which is why it’s so much fun…for adults. So unless you’re like the genius in my theater who brought his seven-year-old to see this movie (because he clearly researches nothing), keep the kids at home for this one.

Because while the movie may be playing the same game as the other superhero movies we’ve seen (the box office game, that is), Deadpool isn’t your typical superhero, nor is this some “save the world from evil” story. In fact, to call Deadpool a hero at all is hilarious because that is the last thing he is (The character was created to poke fun at Peter Parker/Spider-Man, so come on). Sure, he kills bad guys, but only because they’re slightly worse than he is. It’s kind of like a murderer killing a child molester. 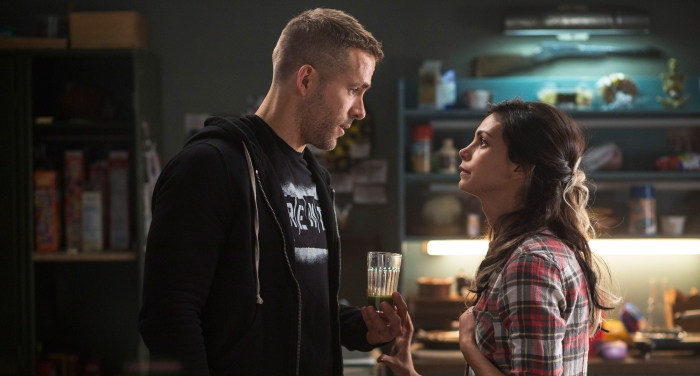 Unlike X-Men Origins: Wolverine, which butchered Wade Wilson/Deadpool (played by Reynolds in both films), this is the origin story we’ve been waiting for. It shows us how sarcastic, mercenary-for-hire Wade Wilson (Ryan Reynolds) is mutated into his alter-ego, Deadpool, by another mutant (played by Ed Skrein, who looks like the love child of Nicholas Hoult and Tom Hardy). While this movie is your typical backstory setup—normal guy gets powers, seeks showdown with bad guy, love interest side story—Deadpool goes about it in a way we haven’t seen in other superhero origin stories.

The framing the writers use is non-chronological, starting the film with Deadpool tracking down and attacking his villain right off the bat. It’s a scene that would normally be reserved as the high point of Act 2, but here it works to very quickly introduce us to Deadpool’s aesthetic and brand of comedy (which perfectly aligns with Reynolds’ comedic style) and get the movie rolling. Then, between fight sequences, the story flashes back to the Wade Wilson years with clever fourth-wall-breaking narration.

The only place where the movie falls flat is in its X-Men moments. Deadpool is a sociopath who’s adamant about not being a superhero, yet this origin story clearly leaves room for Deadpool to get involved with the X-Men franchise down the road (because money). That’s why Colossus (Stefan Kapicic) and Negasonic Teenage Warhead (Brianna Hildebrand) team up with Deadpool to defeat Ajax and Angel (MMA fighter Gina Carano’s cameo role). But the point of Deadpool is that he isn’t a team player or a superhero, so making him the “comes in every now and then” team member (like Spider-Man with The Avengers) isn’t going to work.

Nevertheless, I’m glad Ryan Reynolds broke free of his Green Lantern downspiral. Deadpool was his passion project, and the time he invested definitely paid off.