Man, this is the summer of sequels, isn’t it? But they’re either sequels nobody wanted (Now You See Me 2) or sequels that came decades after their predecessors (Independence Day: Resurgence). Fortunately, Finding Dory falls into the latter category because practically everyone wanted to revisit the beloved Finding Nemo characters. Hell, Ellen DeGeneres even campaigned for a sequel until Disney was finally like OMG FINE ELLEN.

But back to the sequels that come decades after their predecessors thing. Finding Nemo came out in 2003. Does it feel like it’s been 13 years to you? It doesn’t to me, and I think that’s because Pixar movies typically have a good shelf-life (i.e., Toy Story came out in 1995 and holds up animation and story-wise). Then again, unlike other Pixar movies, Finding Nemo has been a constant presence in our lives. It’s always on TV. Disney is STILL raking in merchandising money from it. Kids see Blue Tangs at the aquarium and scream “Dory!” No other movie Pixar has created this kind of cultural juggernaut, right? Which is why the idea of a sequel was worrisome.

And I wasn’t alone in that fear. Tons of people were like “Seriously? Marlin loses Nemo again? He’s a worse parent than Liam Neeson in the Taken trilogy!” But then Disney announced the film would focus on Dory, meaning it wouldn’t just be a rehash of the first film.

This time, Dory (Ellen DeGeneres) is the main character. The plot follows her as she suddenly remembers the parents she lost as a child due to her short-term memory loss and goes on an adventure to find them (and herself, hence the title). Though it’s still about finding family at its core, the sequel is more about rediscovering the past, which is why it works. It builds out Dory’s character more, giving her more meat than just being the “quirky sidekick.” 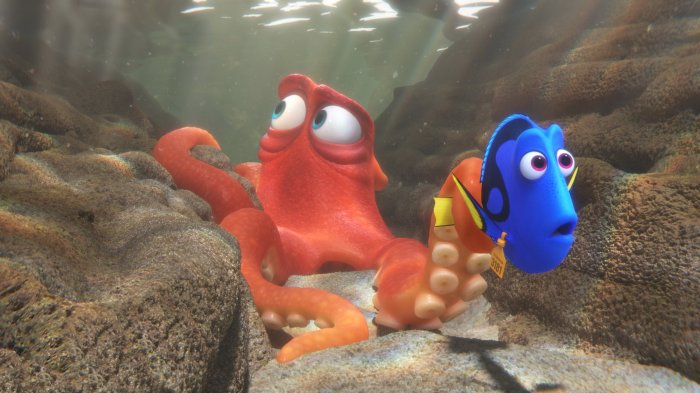 What’s unique about Finding Dory is Dory travels to California with Marlin (Albert Brooks) and Nemo (Hayden Rolence) to the Marine Life Institute (where her parents supposedly are), so they’re in a contained location throughout most of the film. While this helps with not feeling like a repeat, the downside to the smaller setting is the animation is less impressive. We don’t get the beauty and vastness of the ocean like we did in Finding Nemo, which was the “wow” factor. It’s more like visiting Sea World with Pixar, which is kind of boring. I mean, come on. It’s not like Pixar couldn’t find a new setting in something that takes up more than 71% of the earth.

But whatever. Dory, Marlin, and Nemo interact with new characters, allowing us to meet different marine species (which makes up for the lack of beautiful ocean animation, I guess). Of course, we still get callbacks to Finding Nemo favorites like Crush (Andrew Stanton) and Mr. Ray (Bob Peterson). But most of the movie is spent with new characters: grumpy octopus Hank (Ed O’Neill), near-sighted whale Destiny (Kaitlin Olson), dorky beluga Bailey (Ty Burrell), sea lions Fluke and Rudder (Idris Elba and Dominic West), and Dory’s parents Jenny and Charlie (Diane Keaton and Eugene Levy).

As far as jokes go, I don’t feel like Finding Dory is as “quotable” as Finding Nemo. If you’re a parent, you’re probably dancing in the streets at that news because you got sooooo tired of hearing “Fish are friends not food” or “P. Sherman 42 Wallaby Way Sydney.” But Finding Dory is still funny. There’s a running gag about Sigourney Weaver (who lends her voice to the automated guide at the Marine Life Institute) that shouldn’t be as funny as it is. The sea lions yelling at the dim-witted sea lion whenever he gets on their rock is pretty great, and their “Get off!” might be the sequel’s version of the seagulls’ “Mine!” And, of course, Dory remains a lovable oaf, so you can count on her for plenty of jokes.

If we’re talking “cry meter,” it’s not Inside Out levels of feels, but it’s definitely going to tug on your heartstrings. Tiny child Dory is so sweet and so sad in her flashbacks that some of you will weep. But if you’re going into a Pixar movie, you should know that already.