It’s difficult to write a review about Snowden because it’s so bland. I don’t even know how being this bland is possible for a movie with such a good pedigree. I mean, it’s directed by Oliver Stone (Any Given Sunday, Platoon). It has great actors like Joseph Gordon-Levitt, Shailene Woodley, Melissa Leo, Rhys Ifans, Nicholas Cage, and Zachary Quinto. And it’s about a public figure who, to this day, is controversial. That should make it fascinating! So why isn’t it?

Honestly, I think the biggest reason is the proximity of the actual events to our current time. (Side note: What is with recent events becoming biopics? Did Hollywood run out of sequels and remakes?) But unlike the previous weekend’s Sully, which is based around events that happened back in 2009, Snowden is based on events that went public in 2014. Only two years ago. Edward Snowden is still living in Russia, and nothing has come to pass since his NSA whistleblowing. Essentially, there’s nothing new to share.

Hell, Edward Snowden’s story has already been turned into a film—a documentary called Citizenfour, directed by Laura Poitras (who Melissa Leo portrays in this movie). And that documentary is the film that got the message out to journalists about the NSA and who Edward Snowden is. It makes you wonder why a dramatic retelling of the events is necessary when we can go straight to the source. 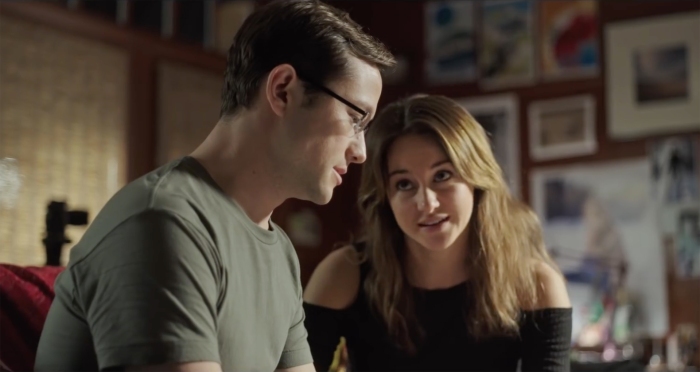 Why not wait until there’s something new to share? Well, one could argue that Oliver Stone has political motives behind releasing this film during an election year (similar to the timing of Zero Dark Thirty during the 2012 election). After all, Stone’s made seemingly controversial political films in years’ past (like JFK, Nixon, and W.). And you can definitely get a sense of which party Stone’s values and beliefs align with from Snowden‘s dialogue. But again, there’s nothing new to reveal beyond what Snowden himself has already shared or what journalists reported about his findings two years ago.

Unnecessary is the best way to describe this movie simply because it lacks a new angle of the 2014 events. In fact, the movie centers around Snowden (Gordon-Levitt) meeting with Poitras (Leo), Glenn Greenwald (Quinto), and Ewen MacAskill (Tom Wilkinson) to tell them his story as they’re working on what later becomes Citizenfour. Sure, it adds the romance between Snowden and girlfriend Lindsay Mills (Woodley). But it seems more like a juggling act of political thriller, biopic drama, and love story than a complex narrative.

Not to mention where Citizenfour showcased the actual Edward Snowden in all of his questionable glory and paranoia, Snowden strips the thrill and “Is He/Isn’t He a Hero” argument out of the movie, opting instead to spoonfeed you what Stone believes. My suggestion is that you check out Citizenfour instead.