Since its premiere at Venice Film Festival, La La Land has been everywhere, and for good reason. Directed by Damien Chazelle (of the Oscar-winning Whiplash), La La Land is like a giant love letter to Old Hollywood musicals like Singin’ in the Rain and An American in Paris. With fantastic original music, tributes to classic films from the 1940s-1960s, and a charming duo with great chemistry, it shouldn’t come as a surprise that La La Land has been nominated for Golden Globes, Critics Choice Awards, and Screen Actors Guild Awards—and I have no doubt we’ll see it at the 89th Academy Awards, too.

Set in modern-day Los Angeles, the story follows aspiring actress Mia (Emma Stone) and jazz pianist Sebastian (Ryan Gosling). Despite being a believable and charismatic actress, Mia never lands the roles she auditions for, thanks to uninterested casting directors and a slew of younger, prettier actresses auditioning for the same parts. Sebastian, a jazz traditionalist (which another character notes as ironic, by the way), wants to open a jazz club that embraces old-school jazz from Hollywood’s golden age, but it’s a dying artform, and he lacks the funds to succeed. While working crappy jobs that help them scrape by, Mia and Sebastian fall in love and learn that achieving the “Hollywood dream” often comes with a price.

What I love about this film is that, even though it uses the musical genre to tell a dreamy, romantic story, the story itself is one of realism. That is, life isn’t a fairytale, and you may not get everything you’ve always wanted. It’s brilliant framing, and it keeps La La Land from feeling saccharine and gimmicky. But even in its sadder, more realistic moments, it’s still vibrant with its beautiful cinematography, catchy soundtrack, and the shining star that is Emma Stone. 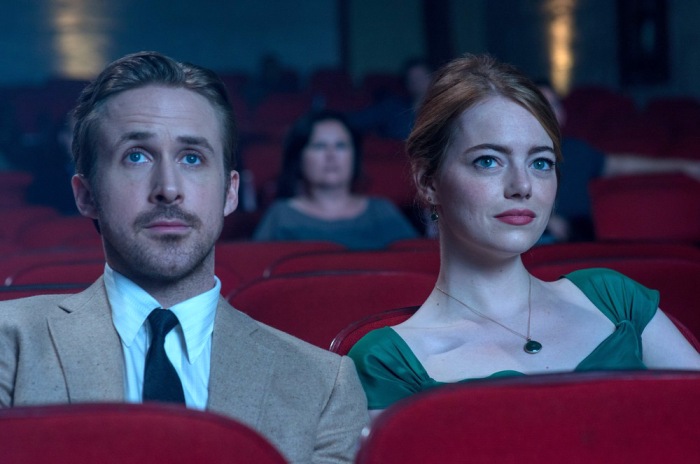 Seriously, Stone is a revelation. Gosling is his usual sardonic yet charming self, and he’s great in this movie. But La La Land truly showcases what it was that casting directors saw in Stone when she first made it to the big screen with Superbad. You can’t take your eyes off of her, and you can especially feel that in the moments when Mia is auditioning for roles or even just staring longingly across a room. By the time she gets to her ballad “Audition (The Fools Who Dream),” you’re mesmerized by her performance.

Speaking of the singing, Stone and Gosling aren’t particularly strong singers (or dancers, for that matter), which felt weird to me. Why have a song-and-dance movie where the leads aren’t polished with either? The dancing, for one, I mean…Fred and Ginger had precise timing, as did Gene Kelly (Debbie Reynolds even said he was such a demanding choreographer for Singin’ in the Rain that she could barely walk after rehearsals). But then the more I thought about it, it makes sense with the fairytale vs. realism. Because life isn’t polished. It’s the occasional misstep. So, in an odd way, Stone and Gosling’s lack of perfection is kind of perfect because of that.

And who cares when the music is THIS good? The soundtrack is a mix of showtunes and jazz that keeps even the slower, sloppier back of the second act moving. If you listen before the movie, check out the toe-tapping opening number “Another Day of Sun,” the full Broadway-like ensemble “Someone in the Crowd,” or the dreary lullaby “City of Stars.” Oh, and you can’t forget about the original piano piece that’s Mia and Sebastian’s love theme. If this movie doesn’t scoop up the music awards this year, I will be pissed!

One thought on “La La Land: A Bittersweet Love Letter to Old Hollywood”