Picture Guess Who’s Coming to Dinner with a dash of Deliverance and a Stepford Wives twist. That’s Get Out in a brilliant nutshell. Written and directed by Jordan Peele (MadTV, Key & Peele, Keanu), the film is about racism and black fear. That doesn’t mean white audiences won’t like it or that it’s “reverse racism” (not a thing), but it does mean this film is crafted around the black experience. So calm down, white people. Not everything is about us.

The story follows Chris (Daniel Kaluuya) as he and his girlfriend Rose (Allison Williams) head to a tucked-away, woodsy suburb full of white people (so probably somewhere in Connecticut) to spend the weekend with Rose’s parents, who’ve never met Chris before and are unaware that he’s black. It’s your typical “meet the parents” scenario, but it’s exponentially more awkward because Chris is immediately otherized by Rose’s family. Rose’s dad Dean (Bradley Whitford) tries to relate to Chris by expressing his white guilt about hiring black help and saying how he’d vote for Obama again if he could. Meanwhile, Rose’s mother Missy (Catherine Keener) is a hypnotherapist who’s determined to cure Chris of his smoking habit and get him to talk about his late mother. And then there’s Rose’s brother Jeremy (Caleb Landry Jones), who’s overly interested in Chris’ physical stamina and sports prowess.

During the first night, Missy hypnotizes Chris. When he wakes up the next morning, he no longer wants to smoke; however, he’s also worried that Missy went far deeper with her “treatment” than he wanted. The weekend gets weirder as Chris has frightening encounters with the family’s groundskeeper Walter (Marcus Henderson) and maid Georgina (Betty Gabriel), as well as a young black man (Lakeith Stanfield) who tells him to “Get out!” during the family’s neighborhood get-together. Suddenly, Chris finds himself trapped at the family’s estate with no one but his best friend Rod (Lil Rel Howery) to discover the truth and help him. And that’s all I can tell you about the plot because anything beyond will spoil the twists!

Peele, of course, is a master of satire and uses that to tell an outrageous story about a black man being terrorized by a white family. But what’s unique about Get Out is that this isn’t commentary on overt racists. Similar to what I said about the antagonists in Hidden Figures, they’re not KKK members hanging black folks or calling people the n-word. No, these are the quiet, seemingly well-meaning people who would’ve voted for Obama for a third term, have to whitesplain why they employ black servants, and talk about Chris in terms of stereotypes that further their prejudicial beliefs. It’s this fear—that even the people who seem like allies, like the “nice ones,” will turn out to be horrible, oppressive monsters—that drives Get Out.

Another thing that’s fascinating about this movie is the way it’s shot. You wouldn’t know this is Peele’s directorial debut from the way he presents his scenes. Where some directors would cut away from their actors to hide those tiny flashes that reveal a deeper, darker nature or what’s to come from that character, Peele chooses to linger, to build upon the tension. It might seem like he’s giving away the story, but, in fact, he’s unnerving the audience.

Even more masterful is the way he evokes racial issues from past and present without having to wink-wink-nudge-nudge you into understanding that that’s what he’s doing. Like the opening sequence of a young black man walking down a suburban street in the middle of the night minding his own business with a car following him until he’s eventually attacked. Or the encounter with the police officer who demands to see Chris’ driver’s license, even though he wasn’t driving the car. Or the way the setting of a New England estate somehow feels like a plantation in the Antebellum South. Or how one of the villains drinks a glass of *ahem* milk. 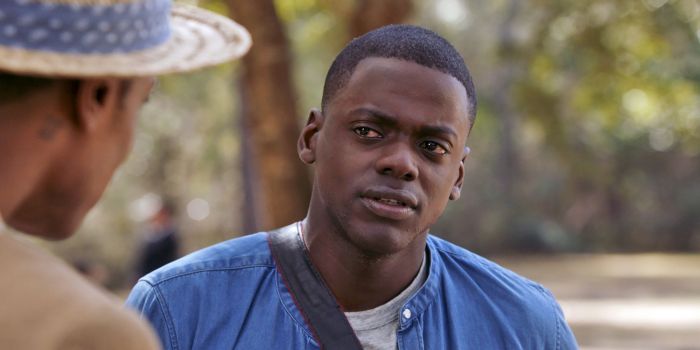 I could easily say more about how excellent this movie is, both as a horror film and a film in general, but I’m going to stop and recommend that you read the following reviews from black film critics. They view Get Out from a perspective that I cannot personally give you, but it’s the perspective that matters most for this particular film. And that, of course, is the experience of similar social discomfort and fear around white people. Check them out: